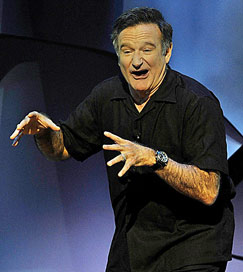 As a kid, I had this video tape of the first HBO Comic Relief telethon, which he was in. I would play this tape over and over and over. It was a 3-hour cavalcade of comics, fundraising for the homeless. Whoopi, Robin, and Billy were the hosts, and they did these great sketches in between standup sets. I was about seven years old at the time, so most of the jokes went over my head. But it sparked this thing in me, “You can be funny. And you can help people. Both at the same time. Like, for a job.”

We used to visit my grandma in California, and I heard that Robin lived near where we visited. One night, nine year old me had this dream I was meeting him. Little did I know I’d actually become a comedian one day.

In the late 90’s when I actually started doing standup, Robin was working on a new show and would pop by surprise to do some stage time. So many of my fellow comedians saw him and interacted with him, but I would somehow always walk in half an hour after he left.

The morning he died, I woke up feeling depressed. I was talking with a friend and realized I was feeling sad about the world. Sad about all the kinds of life on earth that have evolved over millions of years that are getting decimated by the destruction of the rainforests… I had a good cry about it. The depression I felt was like this stuck emotion that wanted to be seen and felt and spoken. And I did. And then I heard about Robin.

A man who lived his life FULL OUT, to the best of his ability. And it’s hitting us for so many reasons, but especially because somehow, “We feel like he was ours.”